The Euro received some support against the US dollar in yesterday’s trading session after a solid round of data from the Eurozone gave a temporary relief from the current political tensions and added to the case for a rate hike from the European Central Bank in the not to distant future.

One of Germany’s leading business improvement indicators, which is namely the IFO business climate index, increased for the second month in a row, hitting the market at 98.9 which was well above the 96.0 figure recorded in January and was also the biggest jump since March of last year. The reading also beat analysts’ expectations who were expecting a figure of 96.5.

It was welcome relief for the European currency which has been overshadowed by the ongoing conflict between Ukraine and Russia which dramatically escalated yesterday after Russian President Vladimir Putin officially recognized the 2 breakaway regions in Donbass as independent places which caused the US and UK government to introduce a severe round of sanctions targeting the European economy.

It’s a relatively quite day today on the economic calendar although we have already seen the release earlier this morning of the Gfk Consumer Confidence Survey from Germany which came in at -8.1, significantly lower than market expectations for a figure of -6.3 but this has been largely ignored by the market a traders wait for any further developments regarding Russia and Ukraine. 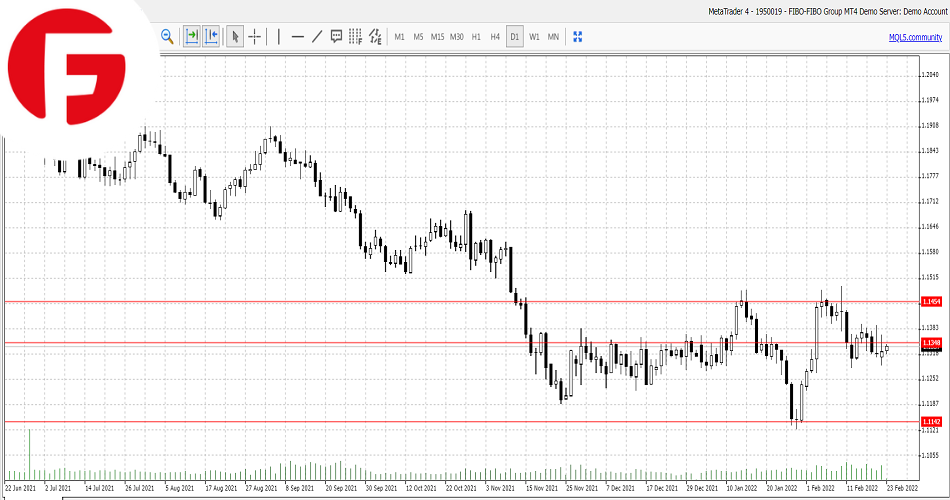 On the chart, we can see the $1.1348 level which once acted as a support level for the EUR/USD currency pair has now become a significant resistance level and the Euro is once again trying to breach this in today’s trading session.

With no further meaningful economic news out today, the chances of the currency pair breaching this resistance level is slim and we may have to wait for tomorrows release of GDP figures from the US which will give an indication if the US economy is still on track and will pave the way for the Fed to hike interest rates next month.

The world of trading has no boundaries